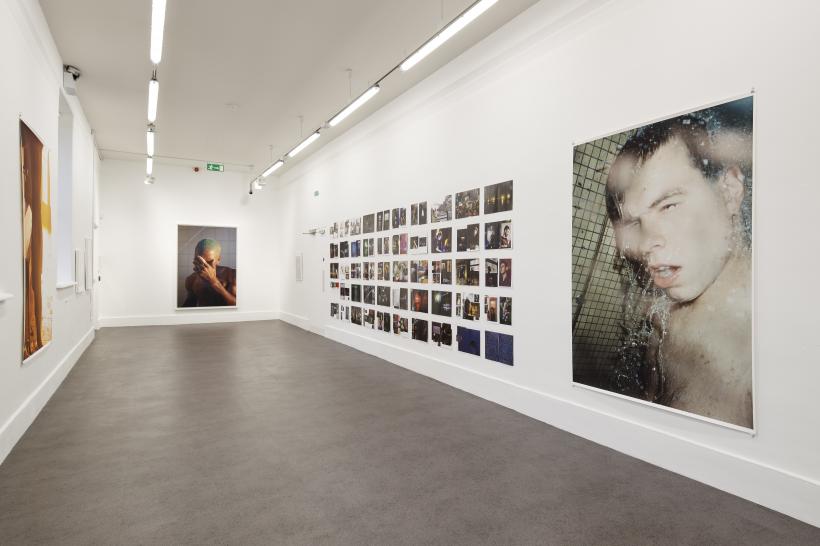 this is tomorrow: Wolfgang Tillmans @ IMMA

IMMA’s unusual layout, a quirk of its former use as a military hospital, influences the way that artists and visitors encounter the space. A series of small, interconnecting rooms and alcoves sit adjacent long straight corridors. This arrangement is usually approached for large scale retrospectives, by placing single projects, often chronologically, in each room and utilizing the corridor as a large antechamber. Wolfgang Tillmans approaches ‘Rebuilding the Future’ differently. First, he has removed any linear narrative through the space, and the longer you spend with it the more you realise that he hasn’t presented a retrospective in the traditional sense. Yes, the works displayed are from previous projects that span a large stretch of time, but the works that cluster together to form natural tangents off each other are based on thematically – notably ‘Silver 88’ (2011) and ‘Silver 82’ (2011), a pair of images created using chemical rollers, that sit opposite ‘red lake’ (2002), which shows a lake reddened due to its chemical makeup. Tillmans’ selection and presentation of his work is unique to each setting and here we see the choice to present, for the first time in a number of years, the early-career hospital operating theatre ‘I’ and ‘II’ from 1994, in the setting of a former hospital; indicating the work’s sensitivity and ability to respond to its environment and shape the narrative.

What drives ‘Rebuilding the Future’ is an overarching motif of time, and its reflective qualities – highlighted in the title which teases the idea that the future is one not just built on the past but rebuilt using our past actions. Tillmans also draws on what photography succeeds and fails to represent; its struggles to represent space and dimensionality. In one of the rooms is ‘We are not going back, b’ (2017), a table of stones laid out under a glass box beside a 1:1 scale photographic representation. What it does succeed in capturing are individual moments that articulate broader and longer concepts of time that exist outside the frame – best articulated via the images of protests which capture the feeling of post-2000s anti-war movements. These sit comfortable among images that capture unique events that stand alone in the annals of time, such as ‘rat, disappearing’ (1995), highlighting the polarity and power that exists in the medium.

Aside from traditional self-portraits, there are other autobiographical moments in ‘Rebuilding the Future’, such as ‘17 years’ supply’ (2014), which features a litany of empty medicine containers, some featuring Tillmans’ own name. These moments draw the viewer into the personal elements of the artist’s work, and again highlight the passing of time. The metronome effect of time arching back and forth dominates a section of the corridor and bleeds elsewhere. We are reminded that it has been 50 years since The Beatles White Album has been released, a distant but reachable pop culture moment. 50 years prior was the end of the First World War, an event that seems lost to the history. Above this are blown-up copies of stamps, one featuring the head of Adolf Hitler, the other a psychedelic 1970s cartoon, the title of the work highlights the rhythms in history: ‘There were 30 years between 1943 and 1973. 30 years from 1973 was the year 2003’ (2004).

If there is an endpoint to the show it sits most comfortably in the last room off the corridor. Here we are shown a large work, titled ‘Sahara, horizontal center line thirty kilometers, a’ (2018), that plays off an image shown in a previous room, ‘Footprint’ (2018), as well as our perception of scale. The room is voiced by a discussion about a proposed film, ‘I want to make a film (2018)’, where Tillmans discusses the power of smartphones and modern photography, noting that we often fail to grasp the power of the instrument in the palm of our hands, and one that needs to be respected. Phrases in the film are repeated, echoing the repetition highlighted throughout the exhibition. In history what often feel like echoes are just the rhythmic cycles of chance and control playing out once more, attempting to balance each other.

What drives ‘Rebuilding the Future’ is an overarching motif of time, and its reflective qualities – highlighted in the title which teases the idea that the futu