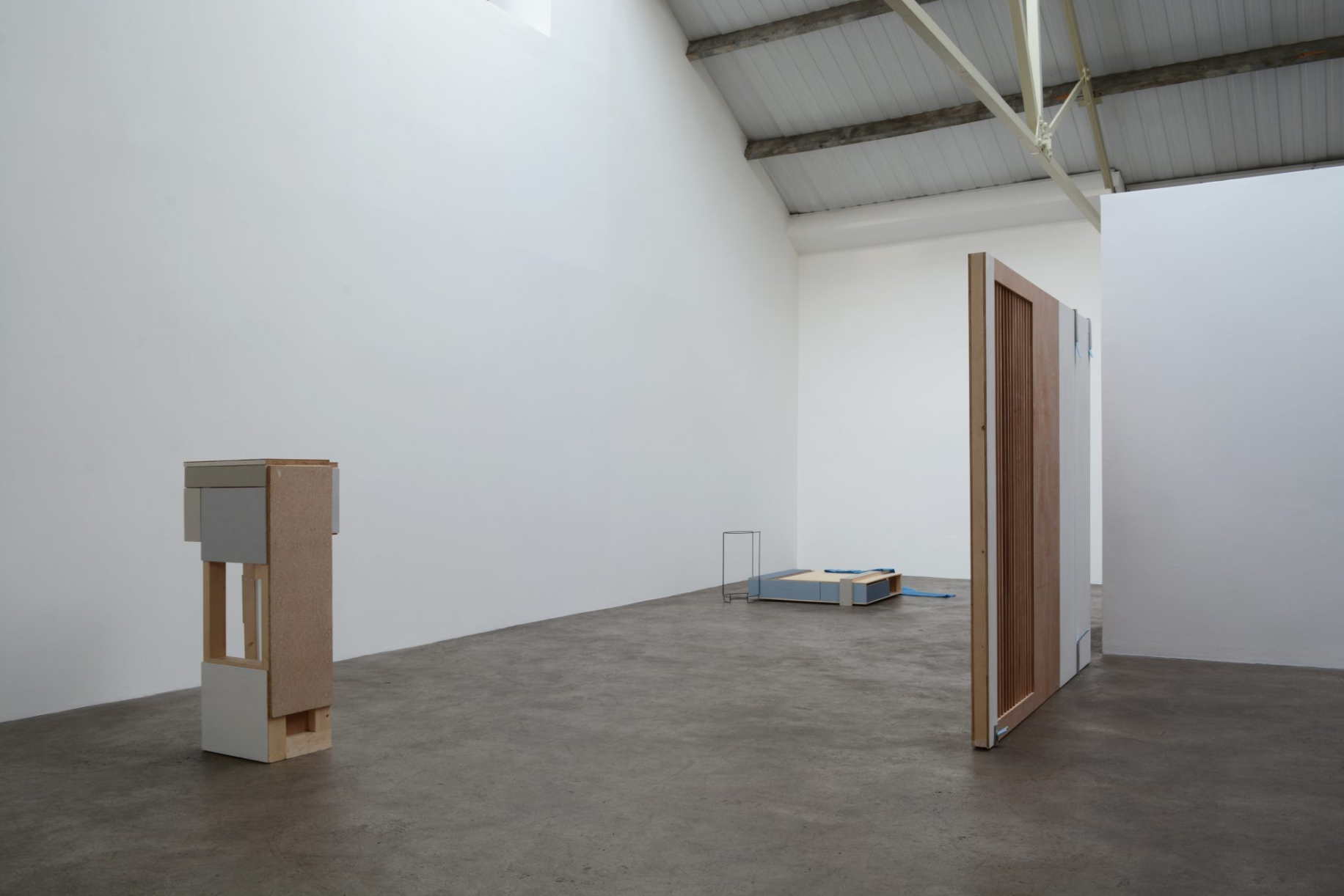 Aidan Kelly Murphy: Prior to studying art, you obtained a degree in structural engineering. Was this something you had planned or was it something that just evolved?

Áine McBride: It wasn’t some grand master plan. I dabbled in painting, knowing that there was something interesting there, but not knowing how to articulate it; being an artist was never framed as something I could realistically pursue. I was interested in looking at art and had friends who were artists so I had an idea of what was going on, but more from the periphery. About halfway through studying engineering, I knew that I wasn’t really interested in pursuing it professionally. Then I went to New York, where I went to a lot of galleries. When I came back, I applied to do an undergraduate degree in art and rented a small studio where I developed a portfolio myself.

AKM: Aside from the architectural and structural aspects of your work, what other influences do you feel this discipline has had on your practice?

ÁMcB: I didn’t have that much of an interest in architecture until I studied art, when it and engineering started to manifest in my work in interesting ways. The bigger connection is more to do with ways of piecing things together, in terms of modularity and layering, rather than, say, the physical capabilities of actual structures. In my sculptural practice, I continue to come back to this idea of creating some sort of landscape, and then occupying that landscape by building it up in iterative ways. In an abstract way, that’s the influence of my engineering background.

AKM: Your work can be described as ‘site-specific interventions’. With that in mind, how does your approach change when installing in gallery spaces or in the public realm?

ÁMcB: I tend to use the term ‘site-responsive’, because the setting helps to make the work, but when the work is made, it is mobile, so it can go elsewhere. ‘Habitat HQ’, an offsite project at The Douglas Hyde (13 – 24 March 2017), was a great exercise, in terms of acknowledging how a work operates in a space. When installing the work, I became aware that one of the places I wanted to install work was a spot where a homeless man came in everyday to read, and whilst the work would have looked well there, I’m not going to put in anything in such a way to disrupt how he engages with the space. It’s more about occupying spaces that were either empty or had had space taken away. A lot of these things come back to a political sensitivity or importance, but not in an overt way. Galleries deal with space in different ways; I’m interested in how they tether themselves back to something that’s outside that space, to consider what’s feeding the work.

Mother’s Tankstation doesn’t have a window to the outside, which lends itself to being more of an enclosed space. However, it’s not a clinical white cube; the space has architecture and a domestic aesthetic. ‘Work suite’ at MTS (21 February – 28 April) opened up a new way of working. Things that I thought were individual works, merged and moved towards being conceived as ‘clusters’. I knew they should be presented near one another, but it wasn’t until they were installed, that their proximity emerged and they fused into a singular thing – which was great, because now I’m more open to that prospect.

ÁMcB: I don’t know how much artists can situate their own work, and even if it’s interesting for them to do so. I think you put the work out and it’s for other people to interpret it. I was reading a text by Liam Gillick, where he was talking about people being overly familiar with what’s going on and making work that very easily slots itself into the ongoing dialogue, and what ends up happening is that they slip stream and get immediately absorbed. Eventually you encounter people who are making art that just looks like other art.

AKM: You avoid sensationalising your materials and objects; is this to maintain the mundane aspects they exhibit in their normal usage?

ÁMcB: I avoid ornamentation, but I’m aware that design is nearby. Design is something that I think about, but I would be wary of making things appear too ‘nice’. I use a lot of trade materials that are fairly basic. It’s important to find a way of demarcating those lines where you let new materials in and use them, whilst also being careful not to fetishise them or rely on nice materials and finishes to do something for you – you don’t want it to look too tasty.

AKM: Do you think growing up in Donegal has made you acutely aware of the urbanity of cities, thus informing a different view on how these spaces work?

ÁMcB: I grew up just outside Letterkenny. I love cities, but I’m never really looking for the park in the middle. I prefer cities that have life in them; those that have a lot of development can actually be sterile. Cities or spaces within cities that are very pristine are denying their reality on a political level. They haven’t fixed things, they have just pushed people out that they don’t want, who occupy spaces elsewhere. Dublin is different, as these lived-in spaces are still visible, and as such we can become more engaged with the fabric of the city. In Donegal, I have a connection to the bog; my father was from Falcarragh and I would have gone there with him to visit my grandmother. I find that dark, barren, amber landscape really rich. The bog for me is about the flatness; you become more aware of your own body in relation to this space. I would have a stronger relationship to that terrain and think it’s more reflective of ‘Irishness’ than the rolling green hills.

AKM: The largest continuation of a landscape in Ireland is probably around the Meath/Westmeath area, with its at bog land and marshes. Do you think those long straights show the possibility of a landscape?

ÁMcB: You hit on something there with ‘possibility’. I have been thinking a lot about this and I’ve been trying to figure out why I’m attracted to spaces in ux. It’s because they haven’t been completely defined in terms of what they are yet, so there’s still potential. For a while I kept coming back to the concept of ‘provisionality’, but I think it’s more about potential. Which again is political, because it could potentially be something for everyone or something we need before it’s finished, but once it’s complete and fully defined, there is no longer the space for possibility.

Aidan Kelly Murphy is a writer and photographer based in Dublin.

Áine McBride is an artist based in Dublin.