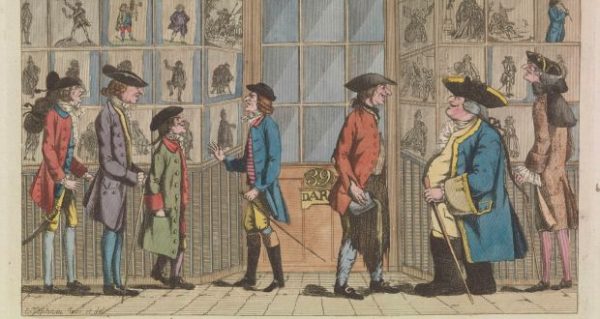 The name Darly is synonymous with both political satire and social commentary in the late 18th Century. The husband and wife team of Mary and Matthew are credited with over 500 comic images, which they designed, engraved and published themselves from their store on London’s Strand – home to the mansions of the nobility they often drew and frequently critiqued. As the title suggests, Wicked Wit: Darly’s Comic Prints is an archive of over 100 of the duo’s drawings that encapsulate their intelligent humour and razor-sharp wit. Split into sections, this exhibition present the Darly’s at their best as they tackled societal fads such as the Macaronis – think 18th Century epicene hipsters, the American revolution and the role of women in Georgian upper society. While this may sound like a show laden down with heavy subject matters, nothing could be further from the truth. The drawings on the wall are light, humorous and as relatable now as they were when first put to paper. Pieces provide social commentary on such varied themes as parents’ scornful reaction to their teenaged offsprings’ dress sense and the extreme lengths celebrities went to in order to outdo each other with their hairstyles.The biggest vehicle for poking fun at the over-educated upper classes is reserved for the Macaronis. These images are crucial in helping to draw parallels with the ever-changing fashion and political trends that define any century. This is a showcase for every digestible celebrity news we feast on nowadays, albeit in 18th Century cartoon form. As well as endless humour, the show touches on more serious subjects with the lack of education among women, the political unrest in the then American colonies and the mistreatment of every day soldiers and workers given equal footing. As a document this collection is unrivalled in its commentary on social life at the time, and as an exhibition these works have few equals in their ability to provide equal parts humour and knowledge. The show runs until Valentine’s day next year and is free for all visitors.