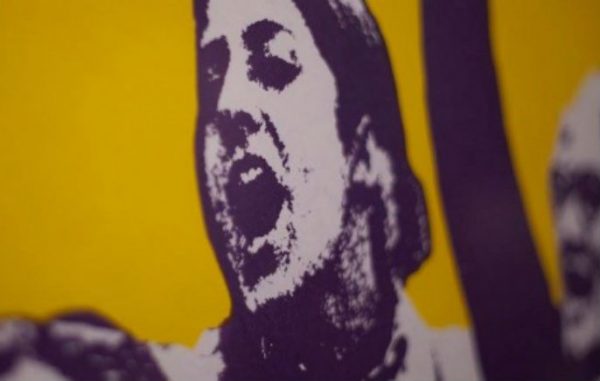 The old Garrison Chapel in Beggar’s Bush is the home of the National Print Museum and one of Dublin’s most unique permanent collections. Your entry to the museum is greeted by a host of printing machines, including a wooden replica from The Tudors television show and a working Wharfedale – the same make of machine believed to have been used to print the 1916 proclamation. The history of mainstream mechanical print making is detailed alongside these impressive machines. Entwined within this history is that of private printing which became popular among poets and artists as a reaction to Industrial Britain. The artists’ process of creating smaller runs of their work relates less to the metal machines on the museum’s ground floor – which are adorned with iconic symbols of both Britain and America and given strong jingoistic names like Columbia and Albion – and more to the exhibition upstairs entitled: A World to Win, Posters of Protest and Revolution. On tour from the Victoria & Albert Museum in London, the show tracks the development of private printing as a reactionary force in the 20th Century. The pivotal role that these posters played within social and political campaigns is brought to the fore. Movements seeking to topple establishments & dictators via anarchists approaches and those seeking a more utopian & equitable future are given equal footing. The exhibit is broken into sections covering different themes and styles from photomontage, subvertising, (the process of ridiculing political and corporate advertising) to equal rights for women and minorities. The result of which is a beautiful mix of works covering Avant-garde Post World War 1 Weimar Germany, through to the Velvet Revolution and right up to modern day social media. In total seventy posters are on display and this exhibition is a must see for all, especially anyone with an interest in print-making. It runs until November 8th.