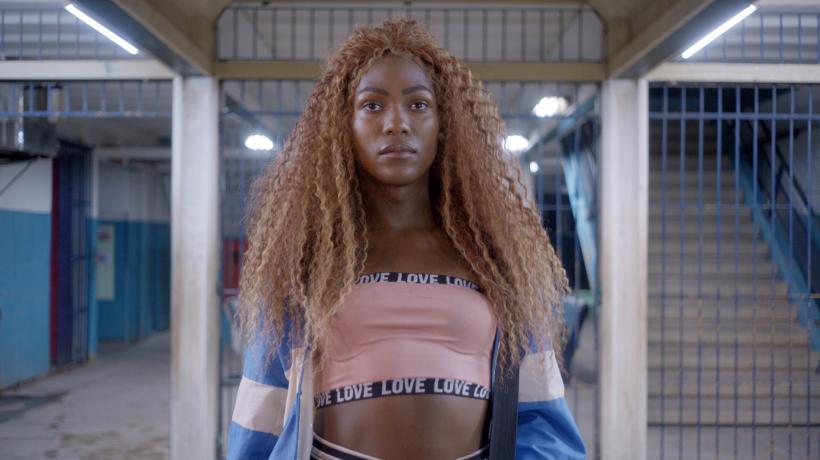 2019 saw Bárbara Wagner and Benjamin de Burca represent Brazil at the Venice Biennale with a new video titled ‘Swinguerra,’ in the Giardini della Biennale. And whilst it’s less than a year since Venice, the world that ‘Swinguerra’ originally inhabited seems like a lifetime ago. Its presentation in Temple Bar Gallery + Studios in Dublin comes amidst a global pandemic, blazing wildfires and a deepening culture war on both sides of the Atlantic. And whilst these topics have dominated the media 2020, they have been core issues in Brazil for a number of years with the continued deforestation of the Amazon and increasing violence against LGBTQ+ communities.

In normal circumstances, the gallery’s glass facade provides a snapshot of Temple Bar – Dublin’s tourist hotspot. Instead, for the duration of the show, Wagner and de Burca have covered the facade in a red opaque transfer to offer additional intimacy and privacy, adding to the increasingly solitary affair of visiting a gallery. Inside, two large screens, positioned at obtuse viewing angles that make a simultaneous, peripheral viewing of both next to impossible, count down to zero. After being advised that I am the only visitor booked for this session, the door closes behind me. The dimmed gallery is awash with a lush red hue that allures and unsettles in equal measures.

‘Swinguerra’ is the result of a collaboration between several artists and local dance groups from Recife – Brazil’s 4th largest urban area and the site of the first slave port in the Americas. On the surface, the narrative follows a group of dancers, many of whom identify as members of the LGBTQ+ community, who congregate in a local sports hall to practice before a large-scale outdoor performance closes the work. This linear reading of the story is challenged by Wagner and de Burca through the use of dream sequences that pepper the films. At points, they operate as both scene transitions and escapes for the dancers. It is not clarified if these are flashbacks or flash-forwards, or even if they are based in reality or instead upon the hopes and fantasies of the dancers who dream them up. Their ambiguity allows us to drift alongside the protagonists, whilst also serving to remind us that for many of the participants, dancing is an escape from reality and the oppression that exists in modern-day Brazil – a country with the highest LGBTQ+ murder rate in the world.

Wagner and de Burca highlight dance’s ability to be a universal tool for the communication of messages both personal and political. We see it as a form of expression and articulation that gives a voice to people who are often voiceless. It transcends social status, language and other cultural barriers in ways that literature and even song can struggle with.

The final scene begins with the dancers performing military-style salutes and discussing the national motto of Brazil: “Order and Progress.” And whilst this presentation of ‘Swinguerra’ is still very much rooted in Recife and Brazil, here it is freed from the national pavilion. It focuses upon its subject matter and the marginalised communities from which they come. In certain scenes, the two screens show alternative views of the rehearsal: one containing a trainer assisting or a group smoking a cigarette together, with the other showing a single isolated figure. We are reminded of the extended support networks within marginalised communities and the vitality they bring to those who participate – a universal message of hope in 2020.

***
Originally published by this is tomorrow, view online here.