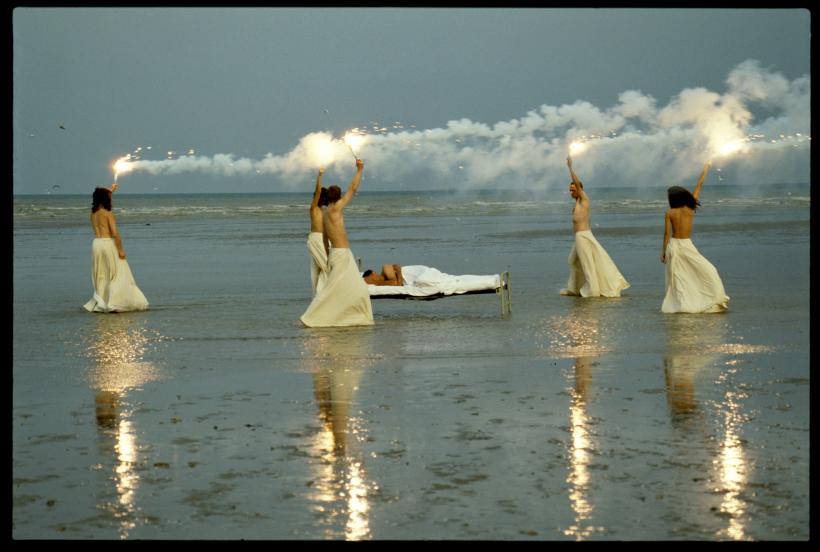 this is tomorrow: Derek Jarman @ IMMA

The vast scale of work on show is what grips you first when entering ‘PROTEST!’, the Derek Jarman retrospective at Dublin’s Irish Museum of Modern Art (IMMA). It spans the entirety of IMMA’s West Wing, comprising 11 rooms, a number of alcoves and two long, connecting corridors. The show displays works from the four decades of Jarman’s career, beginning in the late-50s, as he entered King’s College London, through to the ‘90s and his untimely death in 1994 from an AIDS-related illness aged just 52.

Polymath is often thrown around loosely, but in the case of Jarman it is an apt description. Across his work we see varying styles of painting, multiple forms of video, poetry, set design, and even engraving and gardening. For the Jarman connoisseur, this exhibition is Nirvana; for the neophyte, this is akin to being handed Bowie’s entire discography – equal parts intriguing and overwhelming. Its mostly linear narrative provides guidance for the audience, and as you move through the exhibition you develop a rich understanding of Jarman’s interests and his ever-changing styles and outputs. You can divert off the main corridor and into a room to spend time with ballet set-design or into another to marvel at costumes or take in a movie. We see how his interests feed into one another, the research for his 1986 ‘Caravaggio’ inspiring the later ‘Black Paintings’ (1982)date with their dramatic chiaroscuro and erotic themes. The geometric slate engravings share an aesthetic with Jarman’s ‘Garden of Luxor’ (1972), with the broader topic of gardening itself cropping up in both his garden creation at Propest Cottage and a posthumous gardening book.

This is a necessary multi-trip experience, with 9 of Jarman’s feature films featured at IMMA, including ‘The Last of England’ (1988) and War Requiem (1989), which was Laurence Olivier’s last screen appearance, as well as a number of Super 8 projects and even Jarman’s acclaimed music videos. When visiting ‘PROTEST!’ a large biographical timeline midway through the second corridor provides a crucial anchor. It plots not only his life, but the social and artistic movements and discords that were taking place at the same time, many of which Jarman was involved in – none more so than the protests against the introduction of Section 28 in 1988 which instructed that local authorities “shall not intentionally promote homosexuality.. [or] the acceptability of homosexuality as a pretended family relationship”.

While the works between the opening and closing rooms give a broader sense of Jarman’s career, these poles draw you back, haunting you in-between visits. In the first is ‘Blue’, Jarman’s 1993 film which consists of a single shot of International Klein Blue narrated by Jarman and some of his frequent collaborators, including Tilda Swinton and Nigel Terry. It discusses the impact AIDS, referred to as “the virus”, had begun to have on him physically and emotionally – by the time of its release, four months prior to Jarman’s death, he had begun to go blind and was only able to see in shades of blue. Its visceral impact is heightened by the fact that you must first pass a self-portrait, a fresh faced 19-year old on the brink of London and art college, before meeting the wall of blue. The end of the exhibition features works from Jarman’s time in Prospect Cottage, many featuring themes of death, childhood and religion and a wide cast of objects and curios, including action figures, crucifixes and pill bottles. Outside are Jarman’s large and lush ‘Slogan Paintings’. Painted in 1993, they feature large, scratched letters, words and phrases such as ‘Infection’, ‘Morphine’ and ‘Fuck me Blind’. The works are painted over tabloid headlines taken from the then ongoing media furore in the British Press surrounding the AIDS crisis. By the time of their creation Jarman was close to death, frail in body and sight, but not in wit and execution.

In one of the exhibition’s alcoves, we see a film of a speech given by Jarman at the 9th ‘National Review of Live Art’ in 1989, a year after Section 28 had been passed – at the time he was one of a handful of nationally recognised figures to confirm that he was HIV Positive. Through this speech, we see an impassioned defence of his work. On the adjacent wall is a large photograph of Jarman at a rally with a sign reading: “Still Waiting & F*cking Furious”. Sadly he no longer is, but it is not hard to imagine that if he was that he would be at the vanguard, challenging the relics of the status quo. In ‘PROTEST!’ we see the emotional and socio-political tools Jarman created to fight the contemporary challenges of his today, many of which are articulated succinctly here and provide us with a blueprint to tackle today’s issues.