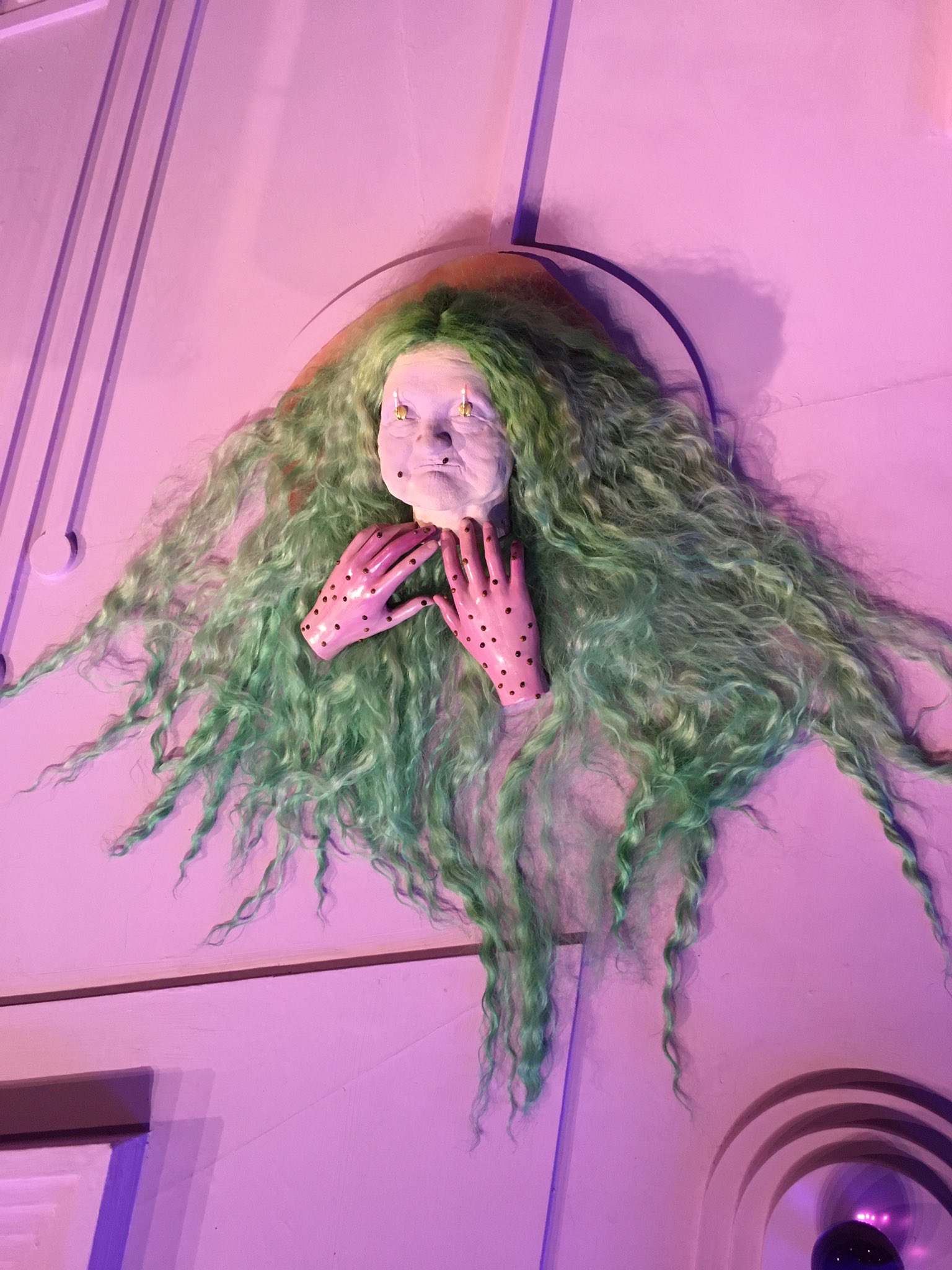 Blue is the first thing that greets you at Temple Bar Gallery + Studios. An inviting blue covers the gallery’s exterior windows, providing privacy to those inside. Beyond the blue, as it does on the visible spectrum of light, lies violet. This warm shade of lavender wraps itself around the internal walls and dominates the gallery floor via a large and continuous sculpture in the same hue. Beyond violet on the visible spectrum lies ultraviolet, the invisible, the mystical. In Tai Shani’s ‘Tragodía’ this movement through colour is represented by a virtual reality play which requires special eyewear to view.

Shani’s choice of VR means that the play and the sculpture are not visible at the same time, and as such operate independently of each other. However, they are intrinsically linked through the story they articulate singularly and completely together – the whole is greater than the sum of its parts. In the sculpture, which snakes its way around the gallery floor, we see signifiers of birth, life and death, through cracked eggs, enlarged fingers, skeletons and Charon’s obol. The architectural vernacular of peaks and ridges invoke thoughts of Mayan and Aztec temples but are neither; they are no particular style and in the same breath are every style, they inhabit the communal and offer the audience a familiarity, a comfort that sits alongside the more garish and alien-looking objects that adorn the sculpture.

Once you don the VR goggles you become the avatar Ghost Child. A colossal human head becomes your landscape, blocking a clear view of the cosmos behind. Your view alters as the heads rotate between the cast of characters: the Mother, the Aunt, Grandmother Eve, and Oedipuss the Cat, as you hear them recall events, memories and experiences. They are all-encompassing, but also tantalisingly out of reach. This dichotomy plays out beautifully across the exhibition as we experience comfort, despite Ghost Child’s awkward viewing platform, while at times experiencing discomfort when we hear other characters freely discuss Ghost Child. These moments of cognitive dissonance speak to the human condition as we oscillate between extracting personal readings of loss and overlaying our own experiences onto the character’s narrative.

I removed the VR goggles, which had covered my tear-stained glasses, to see that the audience which existed before the play began have now departed and in their place are a new set of players. Physically I am disoriented, taking several minutes to steady myself. Emotionally I take longer to shake this immersive and intense exhibition.

Memory, and the flawed and imperfect way we create and recall it, plays a central role in ‘Tragodía’. It is less of a theme and more another player in the play’s cast of actors. The feeling of empathy while watching the events unfold sees the two separate moments of memory creation and memory recall smash together in a version of emotional time-travel. Contrast is then offered in the moments when we bear witness to each character’s individual perspective of a singular moment. In the cosmos of Shani’s VR world, space and time cease to function as separate concepts and instead merge into Space-time; a plateau where time-travel and multiverses are as real as the large nose projected in-front of your face.

‘Tragodía’ delicately walks between the personal and the universal, memory and experience, highlighting blurred boundaries that exist between these contrasting states. ‘Tragodía’ stays with you for days. In its aftermath, you have Megan Nolan’s text to offer both guidance and a route back into the experience – its colour the same as the walls that surround the exhibition. Eventually, it invites us back to the blue windows of Temple Bar Gallery + Studios in search of that violet, and what lies beyond it.