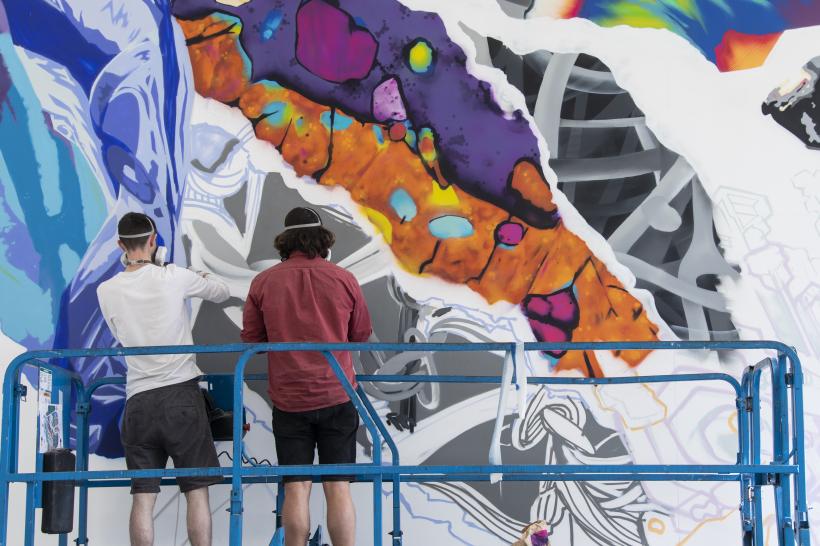 this is tomorrow: SUBSET @ RHA

Recently Ireland has undergone huge social change in relation to its behaviours and attitudes. After rigorous, and often heated, public debates on referendums for same-sex marriage and abortion, both were approved with large majorities. Their approval via plebiscite rather than direct government intervention proved a litmus test for a nation that, albeit belatedly, has entered the 21st century in terms of societal acceptance. These momentous generational changes have also cleared the runway for the wider and more pressing global concerns of climate change. While there are a number of strands to the on-going topic of the climate that require action, fundamentally at their core is a need for behavioural change. This topic forms the core of ‘Climate’ – a three-part project from SUBSET, which is an anonymous collective of artists known for their arresting street murals.

The second iteration of ‘Climate’ is titled ‘Micro vs. Macro’ and is currently on show at Dublin’s RHA Gallery, encompassing the large back-wall of the gallery’s atrium. For the project the collective has chosen to focus on a single aspect of the climate issue – plastic, a ubiquitous compound that has infiltrated all aspects of life. SUBSET, with assistance from a laboratory, has investigated waste drawn from Dublin Bay and the presence of microplastics – shards of plastic less than 5mm in length. ‘Micro vs. Macro I’ and ‘Micro vs. Macro II’ (both 2019) are the results of this research. And while both hang as modest-sized works tucked under the gallery’s main stairs, the former is blown-up, almost disproportionately, on the double height atrium wall opposite.

The location provides numerous vantage points and with each new vista comes a different perspective, which reveals a new element to focus on. This is a stunning piece. A vivid and lush mural bursts out of its centre. The microscopic elements of plastic surge across the walls, giving a sense of movement and change. You can’t escape the mural as you move between the gallery’s reception and its display spaces. The tremendous scale mimics the scale of the problem ahead of us.

SUBSET addresses the dichotomy of micro and macro in the accompanying text by focusing on society’s awareness vs. their selective blindness. The text also includes images of the different uses of plastic pulled from Dublin Bay: a bookie’s pencil, a spoon, a clothes peg and the cap of a spray can. It is this last item that sticks out in your mind as you sit and ruminate in the gallery, and it is here that the project begins to unravel. We are presented with both sides of the plastic debate: production vs. consumption. SUBSET occupies both, producing the piece on show for the audience to consume, but also consuming the materials produced by manufacturers in the piece’s creation. What quality controls exist in the plastic and materials used by SUBSET? No information is provided. We are left to query the collective’s own awareness vs. their selective blindness.

‘Micro vs. Macro’ highlights important questions around our continued overuse of plastics, especially now that we have become aware of their devastating environmental impact. And while it is not always a necessity for an exhibition to provide an answer to the question it raises, an answer here for what SUBSET is doing to mitigate their plastic footprint would have been additional food for thought. Its absence leaves the wider project feeling vacuous, despite its vivid application.