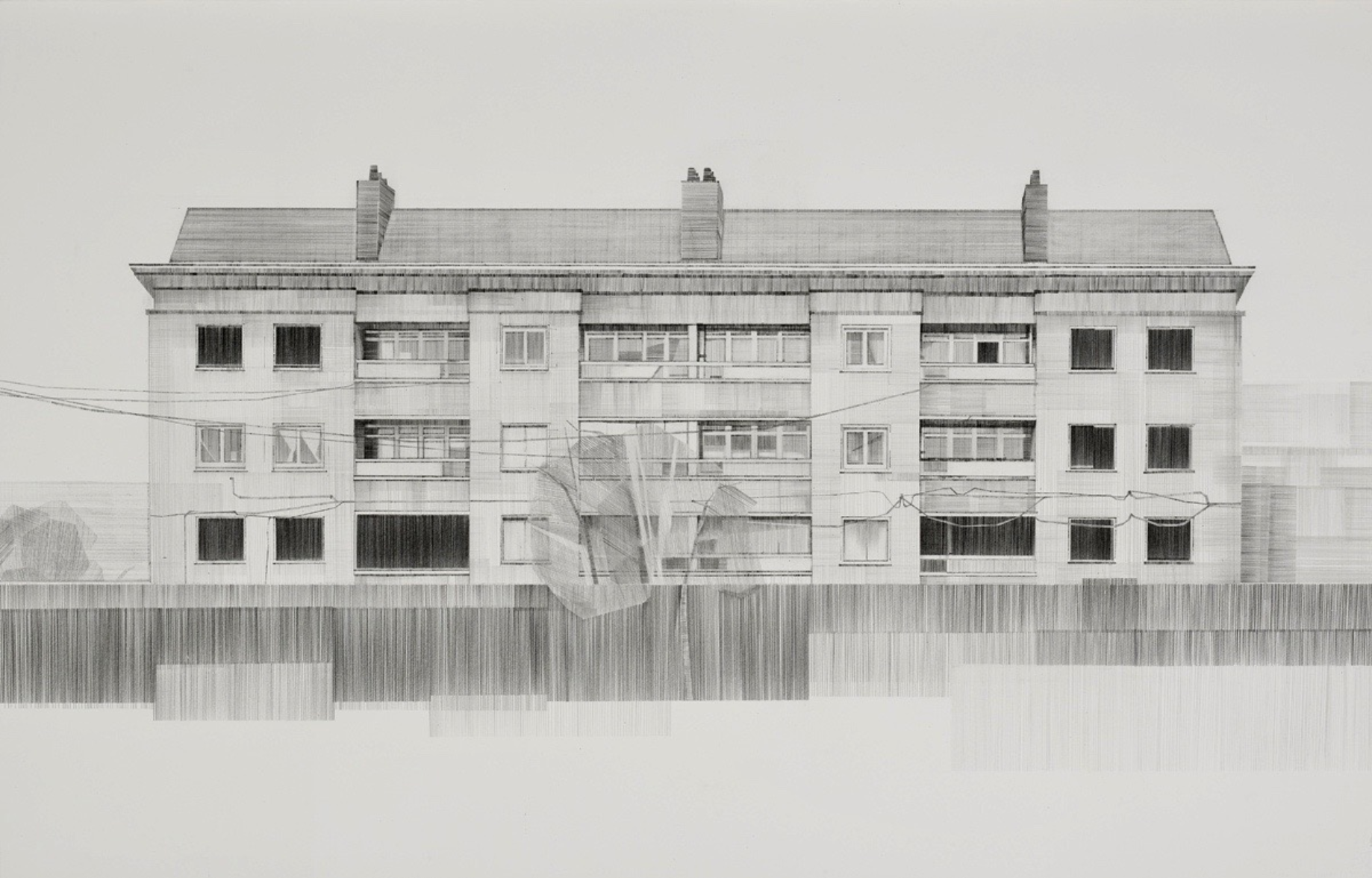 I moved house recently and, in the process, became acutely aware of our perceived ownership of spaces. As I emptied one house of our family’s possessions, our hold on it began to drain. And as we began to fill the new house, our presence began forcing out the previous occupants. Before I turned the key of our old house for the last time, I was left in a space emptied of our things but was also conscious that some of our memories and traces would remain. This often indiscernible line that exists between physical structures and our relationship to them is explored by Dorothy Smith in her show, ‘Land Marks’, at the RHA’s Ashford Gallery.

Smith displays 21 drawings, all from the same body of work, but displayed in the gallery as two distinct subgroups, according to scale and technique. Ten larger pieces take on more mechanical and architectural qualities, with the artist using repetitive but varying pencil lines. Eleven smaller square pieces – given the prefix ‘Other Landscapes’ – see the artist adopt a more freeform approach. Smith’s choice of pencil anchors the work to architectural drawing. Devoid of people, skies and other non-architectural elements; civil engineering and architecture are the only visual languages, with road signs and barriers assuming the roles of textual signifiers. In these pieces, Smith confidently includes only what she wants to, leaving large sections of the paper blank. The drawings occupy the middle-horizon, leaving the edges free for contemplation, as she isolates structures from their context.

This sense of architectural drawing is most prominent in the block of social housing and terraced housing presented in Encounter and The Gardens respectively. In each drawing, trees are depicted as 2D objects, akin to an architectural elevation. The looser lines used help to inject a level of fiction into the work’s narratives. These pieces also help highlight the conflicts between private and public spaces, and how this impacts on the management of space – the block housing is depicted in the process of closure.

In ‘Other Landscapes’, we are presented with a contrasting approach. Here, Smith retains the entire surroundings of her items of intrigue, thus maintaining a faithful link to their context. As a result – and despite the ongoing lack of figurative representation – we observe a more humanly presence through the depiction of objects like postboxes, a tent and a sports stadium. The irony of describing scenes like these as more humanly (when compared to the larger manmade landscapes) is palpable. At times these 11 smaller works seem to act as follies to the larger works, existing in the show as satellite objects, rather than as independent entities. And while the intimacy of the Ashford Gallery helps gel the various works together, a larger space would have allowed them to breathe more.

In the days after visiting Smith’s work, I experienced a heightened awareness of the changes occurring within my urban locality. Looking at the new Mary’s Mansions development on Sean MacDermott Street Lower – and how this post-war social housing is now being partly demolished for refurbishment – I see echoes of two of Smith’s drawings: the aforementioned Encounter, as well as Capital – More is Easy, which features the new Capital Dock construction on the quays. In this artwork, Smith shows the building sprouting up, scaffolding and supports in place, with the injection of capital fuelling its growth.

Where we live is a huge part of our fabric. In recent decades, an increasing number of us are occupying non-rural landscapes, with the most recent census indicating that nearly two-thirds of Irish people now live in urban areas. These spaces are in constant states of construction and deconstruction as they go through their life-cycles. Urban landmarks evoke a sense of identity and, at times, a sense of permanence that can be misplaced. With this exhibition, Smith draws on these often-unconscious observations of the spaces we inhabit, analytically investigating them for us to enjoy.

Aidan Kelly Murphy is a writer and photographer based in Dublin, and Arts Editor of The Thin Air.