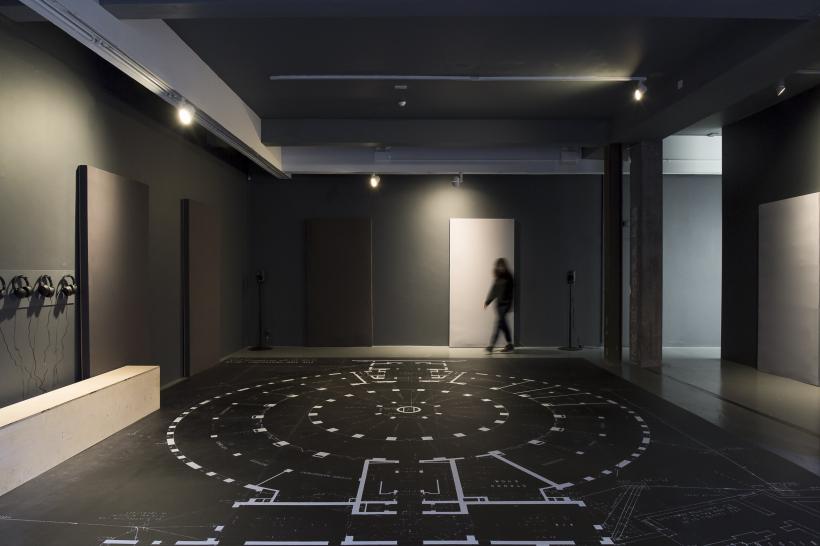 The concept of time travel first punctured the public consciousness in 1895 with the publication of HG Wells’ iconic novella ‘The Time Machine’. Wells first explored this concept seven years prior with ‘The Chronic Argonauts’; and it is the title of this earlier story that I find in Katrina Palmer’s latest exhibition ‘The Time-Travelling Circus: The Recent Return of Pablo Fanque and the Electrolier’. Both of Wells’ stories climax with their protagonists lost to echoes of time. In ‘The Time-Travelling Circus’ Palmer blends fact and fiction to cast a similar frame narrative, drawing on the story of famed Victorian circus owner Pablo Fanque (William Darby) and his wife Susannah Darby – who tragically died when their circus building collapsed.

Central to this work is the notion of time and space and the fluctuating relationships they have with each other. Palmer’s exhibition in Dublin’s Temple Bar Gallery + Studios is simultaneously linked to the Brotherton Library in Leeds University due to her placement of a single copy dossier in the library’s recently returned shelf – the grounds of which also house the graves of the Darbys. Back in Dublin the gallery floor hosts a large hybrid map featuring the original architectural plans for the Brotherton Library (1933), notated with key elements from ‘The Time-Travelling Circus’ (2018). Her two-tone and inverted printing, combined with these notations, help turn the map into a celestial chart for navigating the tale. Along with this map, Palmer presents a pair of audio recordings, featuring a ‘silent’ reading room within the gallery, circus tunes, sampled music, as well as a dual voice recording.

It is this pair of voices which collide and part throughout the recording that drive the show’s narrative. Here we are told of Susannah’s reincarnation as The Electrollier following her death. Reanimated via electricity, like Shelley’s monster in Frankenstein, she sits atop the Brotherton Library as a glass chandelier instead of the circus big top. Pablo, grief stricken and in pursuit of her, has joined the Time-Travelling circus with his horse The Chronic Argonaut. Throughout the audio recording we are drawn back to not just the physicality of the space but also its architectural characteristics. Palmer heightens this with her word choices: rotunda, perpendicular and masonry prick the ear but allow the recording to flow naturally. The gallery’s innate structure lends itself to the exhibition, with a pair of columns invoking both the Brotherton Library and the circus’ support structure. These dual identities exist and flourish within the show: Pablo & William, Susannah & The Electrolier, The Circus & The Library. Palmer plays on the factual elements of the Darby’s lives to embellish the narrative in a rewarding and justified manner.

I was drawn to Palmer’s challenge to the concept of gravity, and her seeming championing of Einstein’s concept of gravity as a geometric property of broader spacetime – a theory which has been used to propose the possibility of time-travel. The longer you spend with the 12 minute recording the more you begin to separate and decipher the voices, picking up additional elements and untangling your own version, albeit one that is still a beautiful marry of reality and invention.