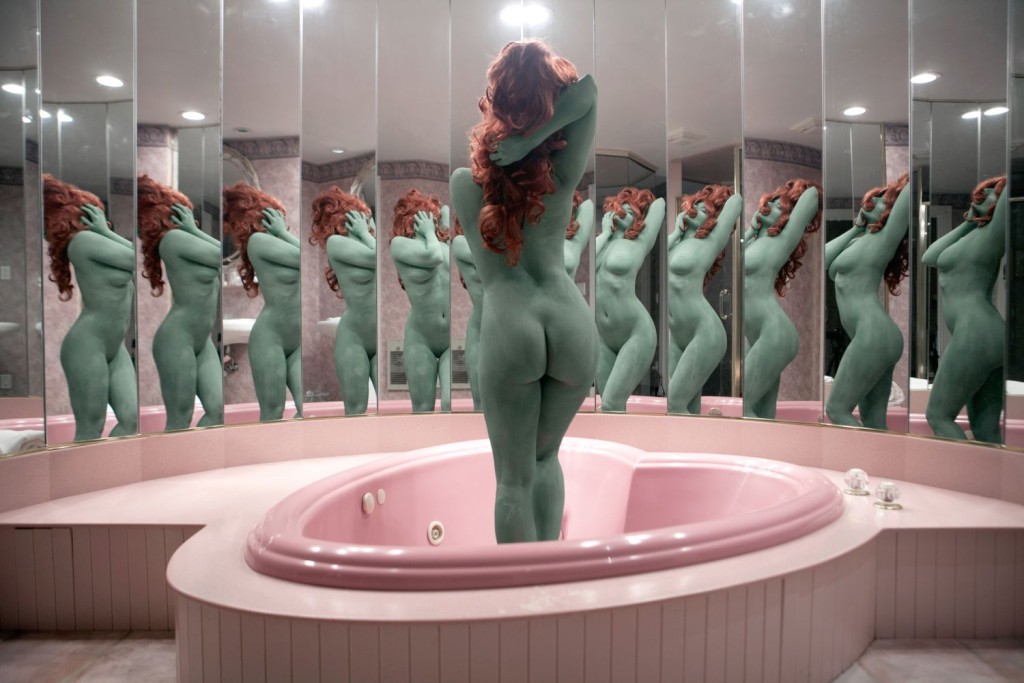 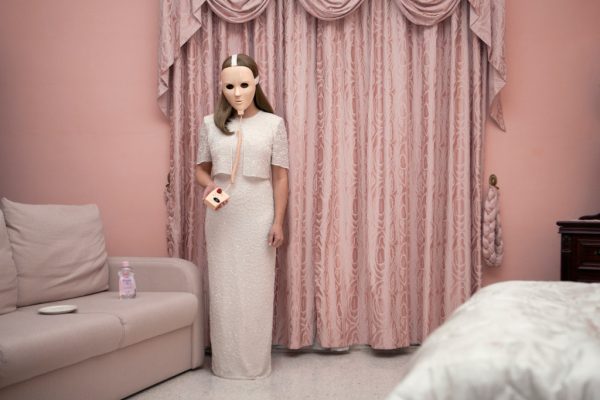 There comes a point in self-portraiture when you lose focus of the fact the imagery in front depicts the artist themselves. While you don’t truly ‘forget’ this knowledge, it doesn’t become the overriding concern. The work transcends itself from self-portraiture to portraiture, and with this emerges the possibility of the work to speak of societal observations rather than personal musings. The more successful the work is the quicker this process happens, which allows for greater insight. The most obvious case of this, in the history of photography, is the canon of Cindy Sherman. It’s hard not to think of Sherman as you explore the environment presented by Juno Calypso in her latest exhibition The Honeymoon Suite in Golden Thread Gallery.

While on the surface this comparison seems lazy – both artists are female, photography is their medium and they both make use of self-portraiture – underneath it’s a recognition of the cinematic qualities of Calypso’s imagery and her ability to defuse any certainty the viewer may have regarding time or location. For this latest project Calypso, with the help of the ruse that she was a travel writer on a research mission, descended to a honeymoon resort in Pennsylvania, middle America. Her cover granted her full access to the site’s multitude of post-nuptial suites, which she used to full effect to create her portraits. The decor of these spaces is rooted in the late ‘60s to ‘70s period – when the curves and pop colours of the swinging ‘60s had been mass produced in soft pastel plastics and faux rugs. The artist’s use of this visual backdrop further dissolves an already ambiguous timeline. This frees the work from any attempt to root it as a response to a specific time period, whilst also recognising these decades as crucial moments in feminist and cultural studies on gender and gender roles. 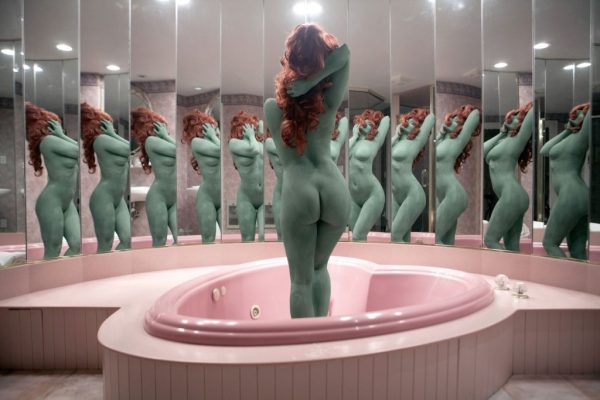 Calypso has employed the alter-ego of Joyce since 2011, and here she takes centre stage which each image a micro play to be enjoyed. As you enter the main gallery space you are greeted with 12 images, 12 stages – with a narrative woven through each of them. The arc of the project, and their setting in a honeymoon resort, adds a layer of sexuality and voyeurism to the work. In each frame we see Joyce, and her many guises, shortly after a different marriage and predominantly using or partaking in a beauty regime. She is seductive but also isolated, no partner can be seen so we the viewer assume that role. The audience’s notions of set gender roles swim around as you being to query the separation of Calypso the photographer and Joyce the muse – and here is the real success of the work: challenging assumptions and shattering preconceptions. The male gaze is occupied by a woman. The space between the photographer and sitter, which normally breeds the tension in portraiture such as this, is one and the same. As a male viewer I question my own visual baggage as I peer into each image one after the other, realising I now partially occupy that space. 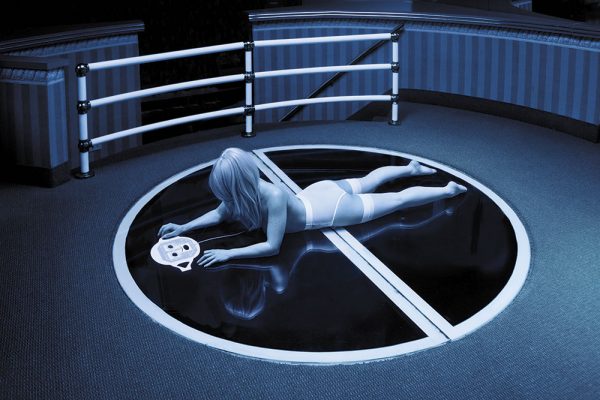 Complementing the main room of photographs the artist has also presented video work, as well as an ongoing series of framed memorabilia and news clippings related to the honeymoon resort. You encounter these diorama-like-boxes as you exit the main space in Golden Thread. News reports, detailed receipts, letters and mementos from the resort used in The Honeymoon Suite are boxed framed together. They provide further insight into the world Joyce has inhabited but also adds a separate, almost sinister, thread of cultish behaviour and hedonistic tendencies. These also operate as a sense of reality, albeit a foreign and unusual reality, between the photographic and video work of Calypso. Behind the curtain a siren’s call beckons you in. A video of the artist in the heart-shaped bath is playing. She gazes at herself in the multitude of mirrors in front. She alters between pale-skinned and robed and naked with green skin. Its not as jarring as I expect, the rooms previous have skewed my sense of normality. The audience temporarily exist in the spaces Joyce executes. The video is short and looping which adds to the mystery. Through another set of the curtains is a second, newer and longer, video piece: Isolation Vacation.

Through its lush portraits and eerie scenery filled with kitsch beauty, Juno Calypso’s The Honeymoon Suite is a compelling but also a fun and fresh look at the debate around both femininity and the modern day beauty culture. Calypso deconstructs the construct of femininity by not attacking it directly but by presenting the isolation it imposes on women, while also highlighting the sometimes farcical nature of its splinter elements.

The Honeymoon Suite continues in Golden Thread Gallery until July 22nd, and is shown as part of this year’s Belfast Photo Festival. Full details are available here.

All images © of Juno Calypso and courtesy of Golden Thread Gallery