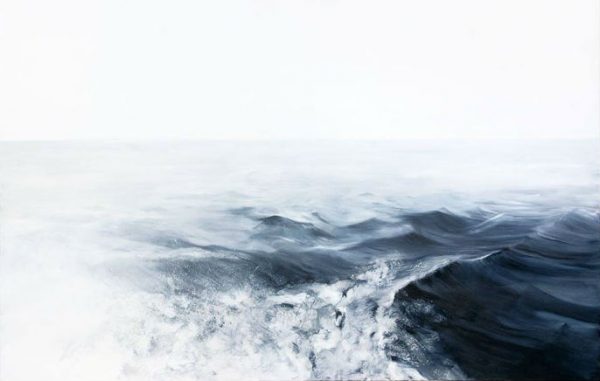 Eight Gallery continues its strong run of exhibitions featuring emerging artists with LUNAR by Dorota Borowa. Hailing from Poland but living and working in Dublin, LUNAR is a series of monochrome-esque paintings of moons, oceans and mountains and is Borowa’s first solo show in Ireland. Repetition and duplication play key parts in this show as works document the ever changing viewpoints presented by the natural world. Borowa’s larger ocean pieces take on the qualities of photographic negatives, a theme that is strengthened in her smaller mountain pieces which have the feel of late 19th Century miniature topographical tintypes. The show is well constructed with the different styles and subject matters interlaced to compliment and contrast each other and serve to accentuate the themes on display. Larger paintings bleed in and out of canvases and as you move around the space brush strokes come in and out of focus, perspectives alter with viewing angles and sea waves turn to sea floors then to mountain ranges and back again. Her moon studies, upon closer inspection, have the feel of a living organism and this deconstruction of the perceived frees the work on show and places them in the free space between reality and full abstraction. The tangible link between the moon, the sea and lunar movements is evident throughout but under the surface of these works breathes a respect for the aggression and harmony of nature. LUNAR runs until December 6th.