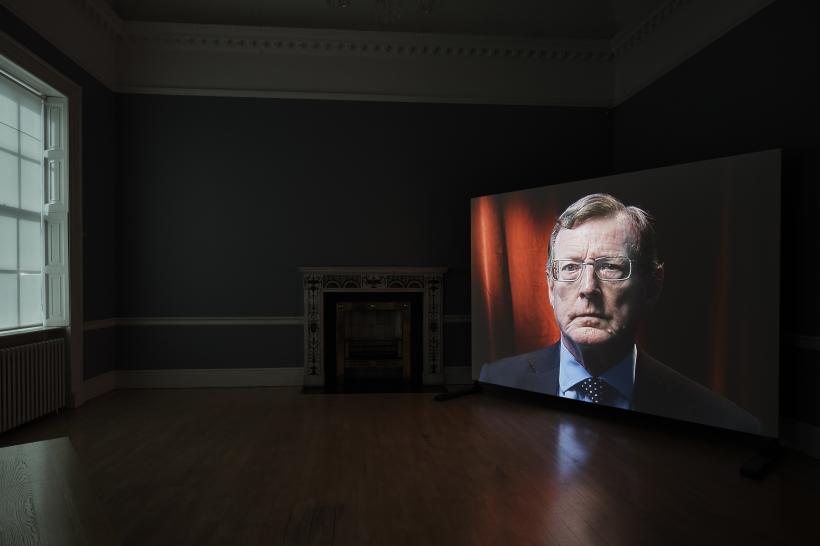 2018 marks the 20-year anniversary of the Good Friday Agreement, a major milestone in Irish history and a landmark in Anglo-Irish relations. After decades of sectarian violence, a new future was proposed and acted upon. This future entered a sense of limbo on June 23rd 2016, when Northern Ireland voted to remain within the EU but the UK choose to leave. Since then Northern Ireland’s Assembly has collapsed in deadlock, with no break in sight. In light of these seismic political events, and the failed attempts to square the circle that is the Irish Border, Amanda Dunsmore’s exhibition ‘Keeper’ in Dublin’s Hugh Lane seems increasingly vital and brings the Good Friday Agreement into sharper focus.

‘Keeper’ itself is the project initiated by Dunsmore in 1998 when she was selected as the Maze Prison’s Artist-in-Residence. As such, this exhibition is both a reflection on the years since the Good Friday Agreement, and also a document on the institutions that existed prior to peace being established. The artist presents a number of video and audio works alongside archival material, as well as a series of portraits, both painting and photography.

Central to ‘Keeper’ are Dunsmore’s video portraits of three Nobel Peace Prize laureates: John Hume, David Trimble and Mairead Maguire. Hume and Trimble collected the award in 1998 for their work on the Good Friday Agreement, with Maguire collecting the award in 1976 alongside Betty Williams for their work with Women for Peace. Hume and Trimble are giants of late 20th Century Irish politics, their identities immediately recognisable. Maguire is less so, but here she is placed on the same platform – reminding us that it was a community who facilitated change. These presentations dominate the dimmed rooms that house them, spaces whose chandeliers recall the colonial past of the Hugh Lane, when it served as the Earls of Charlemont’s home.

The Maze prison is omnipresent in ‘Keeper’. In ‘The Soldier & The Queen’ (2005), we see a triptych of screens that draw their source material from a notated copy of ‘Antony and Cleopatra’, found by Dunsmore in The Maze and presented in a purpose-built glass box to preserve it. It sits in contrast to the items in ‘Billy’s Museum’ (2004). In this film Dunsmore documents the items collected by prison officer Billy Hull, which range from weapons to pornography, secretly stashed on-site by Hull for years. Here we also see the power of iconography as prisoners pose in uniforms to create imagery which will later be sold.

The highlight of the show is ‘The People’s Portraits 1899-1918’ (2018). The artist recovered thousands of glass negatives from the Northern Ireland Prison Service and presents them as a grid of images, towering across from John Lavery’s portraits of Edward Carson and John Redmond. The individuality that existed in Lavery’s portraits was removed from the prisoners, but Dunsmore returns it through her selection of only the head-on and not the side-profile images created. Her choice of the years leading up to the partition of Ireland, remind us that during this period each citizen had a dual identity as both Irish and British – a dual identity that a century later is still challenged by institutions, highlighted by the ongoing Windrush scandal among others.

Dual identities strike a strong motif in ‘Keeper’. The Good Friday Agreement is officially the Belfast Agreement, The Maze is known by several names including Long Kesh and H-Blocks. This duality extends beyond the superficial layer of naming and runs into the core of identity. For generations identity in Northern Ireland was drawn down two distinct lines. The Good Friday Agreement helped entwine them. In ‘Keeper’ Dunsmore reminds us they need to stay tangled.