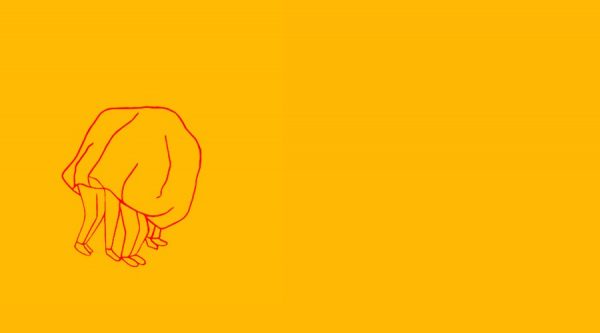 If you’re heading to Temple Bar Gallery + Studios to see Rhona Byrne’s latest work Huddle Tests, be sure to bring a friend. Heck bring two friends, bring a person who you’re not quite sure if they’re your friend yet and maybe even bring a randomer you don’t know. Huddle tests is, as the name suggests, a test environment for a hybrid of wearable artworks and social clothing. Byrne created the series earlier this year as part of Facebook’s Artist in Residence Program in their Dublin HQ. When you enter the space you are greeted by floors and walls covered in a felt-like material that appears to be canary yellow – the hue of which can change depending on viewing angle and available light. Either don matching yellow shoe covers or go shoeless. That’s the extent of the direction that this show will provide as you and your accomplices/victims are set free to try and explore a range outfits designed for groups of two, three, four or even nine people. The work seeks to challenge group social behaviour by forcing awkward and intimate encounters, akin to the mostly anonymous and frontless online social world. One piece features a series of conjoined hats that draw the participants ever closer until personal space is done away with and you’re eyeballing each other from a few inches. The colours yellow and orange feature heavily and are associated with a vast range of positive emotions, while also tied to the stimulation of muscle activity and social interaction. They’re widespread use is only curtailed by the small interjection of black and grey in two pieces, with their colour associated with emotionless power and authority. Going to an exhibition, even in a group, can be a very isolating experience as you view each work on your own. Byrne smashes this approach with Huddle Tests and creates a work that is beautifully awkward to engage with. The show runs on until November 7th in the Temple Bar Gallery + Studios.