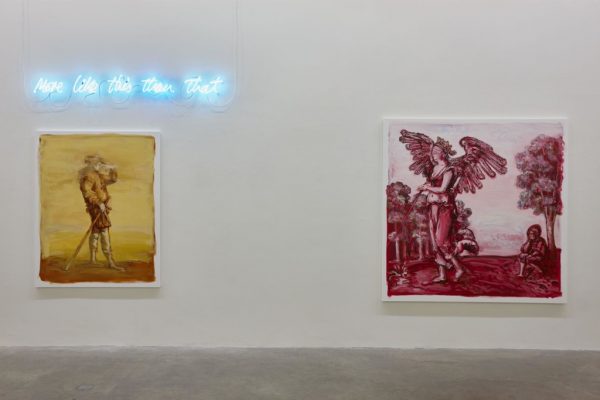 Opening this week in the Kerlin Gallery, ‘More like living that life itself’ is the latest series by painter and mixed media artist David Godbold. This body of work sees Godbold shift from the critical mimicry of previous works to a more focused narrative, one which he has carefully fabricated and curated himself. Though originally hailing from England, Godbold has been based in Ireland since the early 1990s. The colonialism of his native country, and those of other European powers in centuries past, has always played an important role in the creation of his work. This is never more prominent in ‘More like living that life itself’ – with imagery awash with medieval and feudal scenes and a title that echoes the famous Norman phrase of ‘More Irish than the Irish themselves’.

Godbold’s finely rendered scenes of knights duelling, regal and religious iconography and general curios are attacked with swathes of colour and notations that strive to challenge the viewpoints presented. The work, reminiscent of a doodled history book, seeks to call into question society’s collective knowledge of past historical events and assimilated cultures. This is enhanced by the artist’s decision to revisit previously ‘finished’ works and manipulate them further.

Though the work has been created with an attempt to destabilise perceived knowledge, Godbold’s expressive approach helps to free the work from getting too bogged down in its own concept. The images work as stand alone pieces and are able to be enjoyed in isolation – while still allowing the viewer to construct their own cohesive narrative if they wish. Visually this series is as stunning as it is interesting, something which has always been a characteristic of Godbold’s work.